This painting was undertaken as an entry for the Archibald. The Archibald Prize is an Australian portraiture art prize, generally seen as the most prestigious portrait prize in Australia.

The subject must be Nationally or Internationally known in the Arts, Politics or Science. The work painted in Australia preceding the date of the exhibition.

Must be a portrait painted from life, with the subject known to the artist, aware of the artist’s intention and having at least one live sitting with the artist.

Sittings for his portrait took place in the State Administration building on Victoria Square in Adelaide South Australia.

His portrait includes the magnificent southerly view of Adelaide from his office. (In his office he had little replicas of boats, planes, his mother used to build Spitfires when the Rann family lived in Kent during the WWII “blitz”- Binoculars from his father) The other items of interests in the painting speak of overseas trade. Mining, Ship building. There’s a little Hindu sculpture given to him as a gift and an eyeball used as décor from a previous Adelaide Festival..  and because environment – a gum tree. 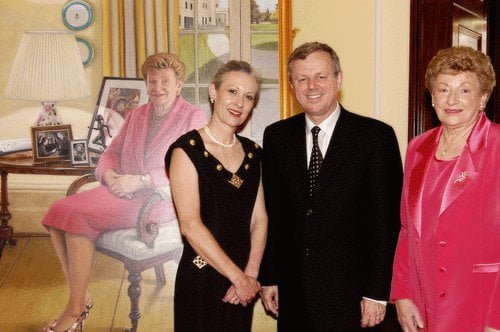